Mehelle is dedicated to preserving the sights, sounds, and memories of rapidly-changing neighborhoods

Our first project is focused on Sovetski, a neighborhood in the heart of
Baku, Azerbaijan. It can be explored here:

Explore, search, and view our material on an interactive map

Explore, search, and view our material in an online database

and introducing
Tours
Guided narratives
through the Mehelle Map

For an overview of Sovetski's history and demolition check out our documentaries:

A look at Baku's recent

A collection of short stories from Sovetski 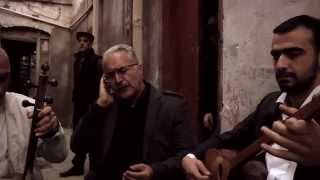 "Beauty All Over My Skin" Music in the Alley's of Sovetski

Mehelle is a project from Ajam Media Collective dedicated to preserving the sights, sounds, and memories of rapidly-changing neighborhoods. Utilizing a unique combination of modern tools like digital mapping and 360 degree video with traditional documentary photography and film, Mehelle serves as a resource for local inhabitants, community organizers, and urban researchers long after such neighborhoods have been demolished, gentrified, or transformed by private and state-led construction projects.

Mehelle, from the Arabic mahallah (a neighborhood or quarter), is a term used by communities stretching from North Africa to Southern Russia and from India to the Balkans. It refers to the semi-private walled neighborhoods centered around social institutions such as the local coffeehouse, square, or place of worship. In these spaces, people live and work, resolve conflicts, and build collective identities. However, these residential units are slowly disappearing with the development of municipal beautification projects, large-scale transportation infrastructure, and suburban expansion. Mehelle serves as a repository for the materials and personal histories of those living in these disappearing close-knit communities.

The Mehelle project’s first featured neighborhood is Sovetski, located in the heart of Baku, Azerbaijan. A 200 year-old neighborhood that was once home to 50-60,000 people, Sovetski has become the site of the state-led urban planning campaign. As of October 2019, the vast majority of the neighborhood has been demolished. Over the last five years, however, our team has painstakingly recorded life in the local shops, labyrinthine alleyways, and abandoned houses--the results of which can be viewed on out map here.

Mehelle is always interested in hearing from you. Whether you have a project you'd like to pitch, a question about our work, or just want to say hi you can reach us at:

We need your feedback to make our site as user friendly and accessible as possible. Please take a moment to fill a feedback form here. Forms can can be edited after submission:

If you have material, including photos, videos, music, radio broadcasts, or even personal memories you can submit them to us here:

If you like our work check out some of these other projects exploring Baku's history, alternate documentary storytelling practices, and interactive mapping